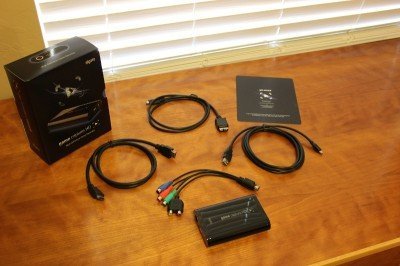 It’s not often that something fresh comes out that feels like it was truly meant for gamers.  Lucky for us, Elgato has released their new Game Capture HD.  It’s a personal recording device with a sole purpose of recording Xbox and PS3 gameplay.  It’s small, simple, and incredibly easy to use.  Better yet, the picture quality is amazing and it comes with all the extra necessary cables. With a retail price just shy of $200, it is a bit pricey.  What makes the Elgato more compelling though is that shares a similar price point with other competitors.  So with price not being a factor, it comes down to features, reliability, and ease of use.

The unit packaging is small and simple.  The device itself is powered via an included USB cable which connects to any computer running Apple’s OS or Windows 7.  Aside from the USB cable, all you need to do is connect an HDMI from the console to the device, and then a second HDMI from the device to your monitor.  This allows real-time viewing of the game so it doesn’t impede on your response time or what is also known as “input lag”. Loading the software via the company’s website will give you the most recent version.  It’s also your only choice because a disc isn’t included in the box.  After you install the software, you’re ready to go.  When you first launch the program it temporarily disables the device’s video output.  With that being said, don’t plan on loading the recording software in the middle of gameplay or you’ll definitely regret it.  Using the program is very easy to understand, as the video below demonstrates.

Aside from learning how to use the software as the above video demonstrates, everything is very straightforward.  The cable connections are extremely simple, the unit is very compact, and you can record any gameplay on your Xbox 360 or Playstation 3.  From what I’ve see on the market, this is one if not THE best solution for gamers looking to share their skills and footage.  It get’s our Hell Yeah award.

Last but not least, here’s an example of an upload made directly from the software to YouTube: