Many car guys (and gals) have heard about this car months ago.  What started as a rumor turned into reality when Lexus announced a GS sedan powered by the bonkers 467 HP 5.0 Liter V8 that powers the RC F.  What many people do not realize however, is just how light the Lexus GS platform is.  It doesn’t matter though, the GS F is officially here and I was lucky enough to drive a few at a local track. 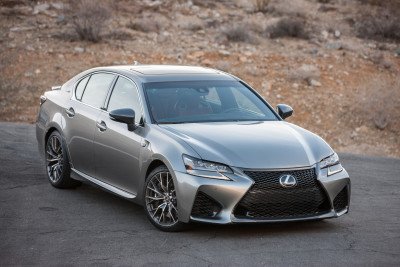 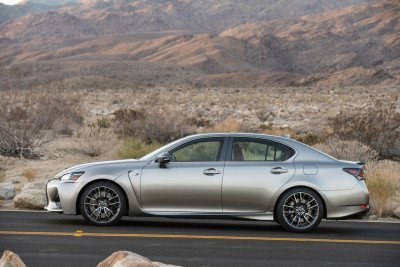 The Lexus GS 350 spanked a handful of competitors in the similarly priced luxury sedan bracket.  Its engaging style and handling, coupled with a robust 3.5 liter V6 engine made it a great all-rounder for lugging the family around without feeling like you’re driving a boat.  Modern electronic conveniences, reliability, and Lexus refinement has kept the GS as a top pick for anyone in the market.  So what happens when you take a fifty thousand dollar sedan and give it a testosterone boost?  We went to the Chuckwalla Valley Raceway to find out. 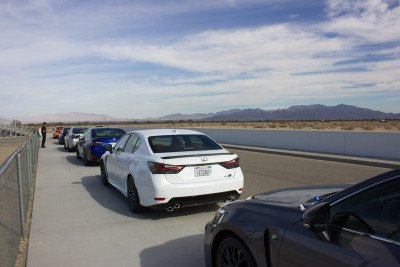 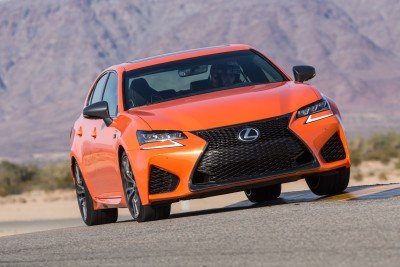 A Day to Remember

I knew it was going to be an awesome day once I saw a handful of Lexus RC F coupes and almost a dozen GS F’s sitting in pit lane.  When your baseline car to compare the new GS F to is a 467 HP coupe from the same brand, it’s hard not to be excited.  I initially spent some time with the Lexus RC F so I could focus on learning the track first, before exposing myself to the new sedan.  The RC F was pure bliss.  The TORSEN differential equipped RC F’s loved to step out under transitions and throttle input making them more demanding and engaging to drive.  The TVD equipped RC cars were a bit easier to drive, and noticeably faster around the track due to the extra traction in the corners.  The big motor was tamed by a ridiculous braking system, both of which were transplanted in the new GS F.  As time went on, the GS F experience was about to begin. 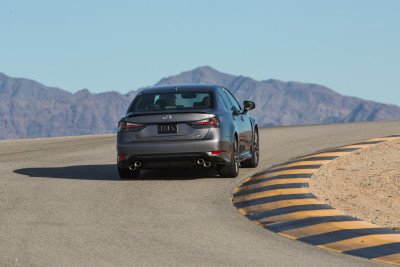 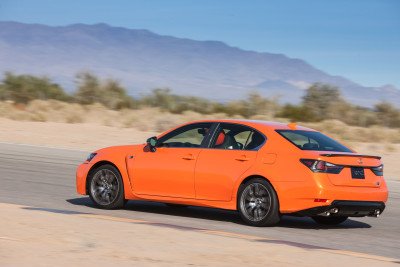 The GS F weighs only 76 pounds more than the smaller, 2-door RC F.  This is partly due to a slightly softer chassis (think comfort), compared to the insanely reinforced RC F.  With a slightly longer wheelbase creating a weight distribution closer to 50/50 than the RC chassis, the GS F felt incredibly easy to drive.  The RC F feels more like a race car if you dart around from turn to turn, but I think most drivers would end up driving faster in the GS F due to the controlled nature of the chassis.  It feels more compliant, more forgiving but just as rewarding as the RC F.  Honestly it’s quite astonishing how much they are able to squeeze out of such a large car.  As the day went on, I pushed the car harder and harder.  I started to notice what an additional year of development on the suspension did to the driving characteristics.  The brakes showed no signs of fade, which made me push even harder into the turns.  The experience isn’t as visceral or intimidating as the RC F, but I couldn’t help but smile whenever I exited the “bowl turn”.  The G-force sucked my stomach into the back seat as the car relentlessly accelerated passed 90 mph on corner exit.  This was a car that could comfortably haul my entire family from Southern California to Phoenix, yet whoop up on a bunch of wannabes on the weekend.  All the right pieces are there.  You have a naturally aspirated 5.0 L V8 under the hood, large brakes, an 8 speed paddle shift controllable locking automatic transmission, and a fairly stiff adjustable suspension.  The exhaust makes a wonderful pop or two when you lift off the throttle at high RPMs.  The sound was so fulfilling, I would look forward to it each time prior to stepping on the brakes before turning in towards the next apex.  All in all, the car does exactly what you want it to.  Put it in Slalom mode with Sport S+, or turn off the stability control if you want the back end to rotate, or set it to Sport/Normal modes if you want an extremely tight (and safe) amount of electronic assistance.  Modulating the gas helped me dance the front end in and out of under-steer, with gobs of grip when I needed it most.  My track experience exceeded all of my expectations for what a car of this size and weight (4034 lbs) could do.  This car fills a void you never know you had, and I couldn’t have had a better time on the track for such a reasonably priced performance sedan. 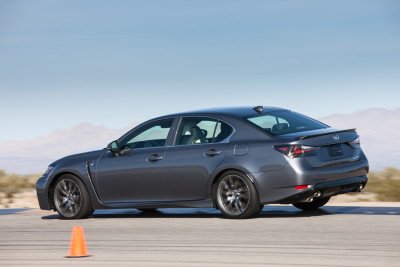 The GS F takes a couple optional components from the RC F, and makes them standard.  The Torque Vectoring Differential (TVD) is the only choice on the GS F.  What makes this differential unique to many torque vectoring differentials on other brands is that power distribution can be directed more towards one wheel, without the use of brakes.  Many companies apply braking to the inside tire on a turn, for example, to control the torque output.  Lexus’s new system uses electronic clutches to help push the car around the turn by diverting extra power to the outside wheel.  It then pulls back on the inside wheel under braking and deceleration.  The end result is more traction, speed, and less tire wear.  The obvious benefit is that the car is easier to push to the limit. 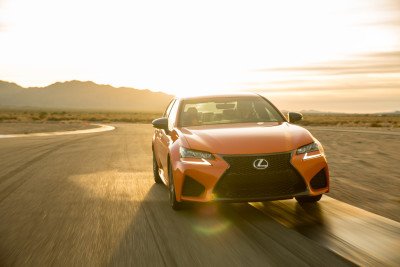 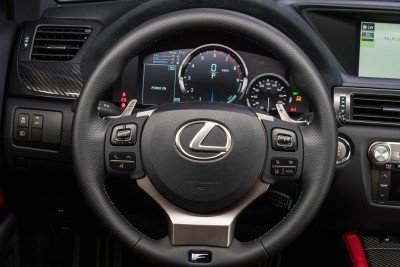 Interior photos speak for themselves.  The GS F is adorn with top scale amenities and intricate details throughout the cabin.   From the Alcantara stitched armrest, palm rest (for the infotainment controls), and gauge cluster, to the faux carbon fiber cup holder lid and dash panel, Lexus spared no expense with luxury.  Everything you touch is padded.  It makes you feel welcome, and that you truly got what you paid for.  The steering wheel is thicker than the base model GS, and the seats are stitched in such a way so that your butt doesn’t slide around when going out for a spirited drive.   It’s one of those cars that stands out in an otherwise boring segment.  The GS F has a feature shared with other high end F Sport equipped Lexus’s called Drive Mode, which includes Sport S and Sport S+.  However, unlike the RC F, you can customize your Sport S and Sport S+ settings (same with normal and Eco).  This includes steering feel, engine response, drivetrain response, and suspension characteristics.  The RC F options are predetermined settings that you cannot change, but Sport S+ on the RC F is just as aggressive as the maximum settings available on the GS F.  With the car being a larger, more luxurious model than the RC, the GS naturally retails at a much higher base price of $85,000.  The only interior package you can add is the 17 speaker, 835 watt, Mark Levinson audio system.  Standard are the large 12.3″ center display, color heads-up display, and heated/ventilated seats, Navigation, and more.  Needless to say, do not expect much a price variance when shopping for your very own GS F.  Colors, the sound system, and a few accessories (hello orange brake calipers) are the only thing that changes the price. 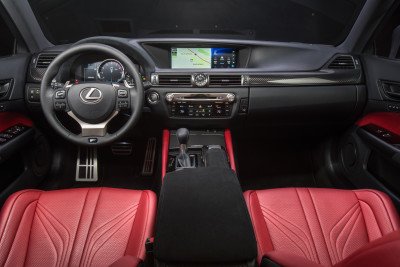 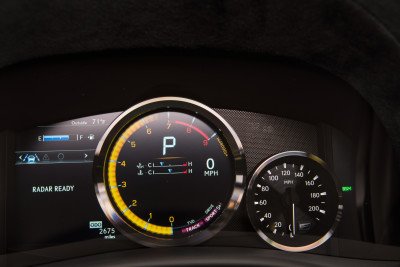 My experience was limited to the race track only, as no GS F’s were available to drive on the street yet.  I’ll keep my review focused on what this car represents, and avoid all speculation or justification as a daily driver until I have had more time on the street with it.  For those occasional weekend getaways at the track… my God does this thing deliver.  You would need to see a normal GS sitting next to the F model to really see the subtle differences between the two (hood line, brakes, ventilated front fenders, exhaust).  That’s a good thing, because many people looking at the GS do not want the extreme styling of the RC or an Italian exotic.  The only way this car could have been better on track were if it had race spec DOT approved tires, and a louder exhaust/intake setup.  I was more than satisfied with what comes out of the box, but this car is like a drug you just can’t seem to kick.  The harder you push, the more rewarding, and more addictive it becomes.  The combination of the thick steering wheel and the “I’ll never let go” seat design coupled with a roaring V8 that pulls for days, brakes that could stop a freight train, and a Mozart-like composition of handling characteristics makes this one of, if not the most exciting sedans I have ever driven.  I personally cannot wait to sit back in it one more time when I drive it on public roads. 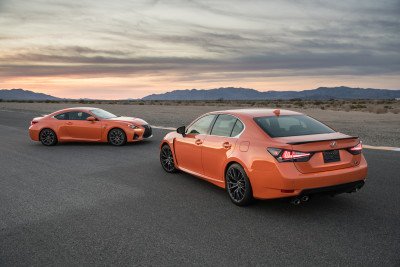 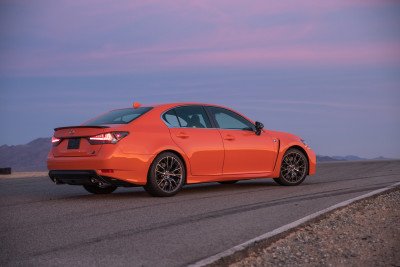 Lexus continues it’s hot streak of cars with the addition of the 2015 NX 200t.  This is the smaller and more stylish brother of the Lexus RX 350, with fairly different driving dynamics.  Instead of …

They Did It! I want to call out the most important change to the 2020 Lexus RX before anything else. The Lexus RX 450hL has Android Auto and Apple Car Play support WITH a touch …