This svelte little battery breaks the norm of cheap and bulky battery packs.  Weighing in at only 3.5 ounces (less than .25 lbs), its height is a measly .3 inches.  The 4.3 x 2.6″ rectangular battery has a 3000 mAh lithium polymer battery which means you can charge it repeatedly and it will keep on ticking.  The anodized aluminum body presents an upscale look with 4 LEDs hidden beneath the surface next to the USB charging ports.  The USB output is rated at 1 amp so the charge times are reasonable for most phones. 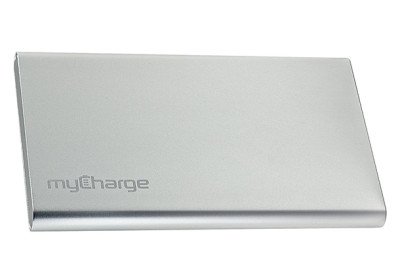 Simply put, I’ve been using this a lot.  In fact, it’s worked so well, my wife likes to claim it from time to time so she can use her iPhone throughout the house while it’s still charging.  I can’t say it enough, the slim form factor alone is enough to justify the price (MSRP of $60).  With a 4′ or longer charge cord, you can tuck this little guy away in your pocket while still using your phone.  Most other charge packs are too big and bulky.  The battery seems to charge our phones quicker than expected, with my wife’s iPhone 5S getting fully charged within a few hours.  There are no pesky switches, just two ports and four lights.  When you plug this battery into the wall with the included charge cable (no AC charge included), small LEDs on the USB side of the battery will illuminate and start pulsating.  One LED means the battery is at or below a 25% charge.  It will ascend to four LEDs in which the final light will pulsate until charging is complete.  Once the charge is complete, all the lights will turn off and you’re ready to go.  Curious of it’s finished?  Simply shake the battery a bit and the lights will come on, indicating the charge level.  This simplifies the device because there’s no button to press or turn on and and off.  When you eliminate mechanical switches, you eliminate the more possibilities for device failure.

This is a great battery pack.  I thought I would eventually purchase something with a greater capacity, being that 3000 mAh is not the largest capacity there, but it’s been able to fully charge my HTC One M8 from near dead without any issues.  Between the phone’s battery and this, I don’t see how you could not make it from morning to night.  At that point, plug it back in and get ready for the next day.  Because of this, I now have a hard time justifying anything more bulky than this.  The price may be steep, but compare this to an Apple product.  Clean, well made, trendy, because you pay for what you get.  I don’t mind quality, and in this case I would gladly pay a premium price for a high end product like this.  It pays for itself when a year goes by and you haven’t bought three replacements from a knock-off brand.  Long story short, we highly recommend this battery.  Larger ones are available for charging multiple tablets for extended periods of time, but for a phone, there’s no beating this.