The Netduma R1 router is without a doubt a game changer when it comes to personal networking for gamers.  Let’s make no mistake and state now that this router’s biggest intent is to please gamers, and give them the control they are looking for.  It’s control that some do not realize they could have, and can open the doors for improved experiences and versatility (which I’ll explain later).  So what does that mean?  For starters, you can virtually eliminate rage-inducing lag that would cause the most competitive gamers to pull their hair out or slam the controller down.  “Shenanigans!”, they would say, among other more choice words.  So with great excitement and virtual prowess, I introduce the Netduma R1.

Let’s first talk about what this router is, and what it isn’t.  This is not a dual-band wireless AC router that you can directly compare to an Asus AC3100 or Netgear Firehawk.  The wireless hardware on the Netduma consists of a fairly strong 2.4Ghz Wireless B/G/N antenna, but that’s it.  With a 1000mW antenna, the range is above average, especially for being internal to the box, but the speeds aren’t really comparable to a much more expensive wireless access point with multiple external antennas.  In fact, I would think of this more as a wired router, and disable the wireless antenna.  From there, I would buy an appropriate router that gives you the wireless performance you’re looking for.  Features like MIMO, dual-band, and Wireless AC come to mind.  In my experience, the ASUS AC3100 is a stellar wireless performer, with mediocre network control, especially considering its price.  I originally bought the Asus AC3100 with loads of excitement because of all the glitz and glamor on the box.  WTFast gaming centric features for QoS, uber speeds on wireless, gigabit LAN, etc.  Turns out the QoS was poor, and WTFast required a monthly subscription, which was not cheap  All it did was prioritise dedicated servers for specific games in it’s list.  If you didn’t have one of those particular games, the service was useless.  Icing on the cake?  The WTFast only impacts PC games with dedicated servers.  The peer-2-peer and console folk might as well ignore all gaming features on that box.  The wifi is excellent though, so paired with a Netduma, you will have an amazing network. 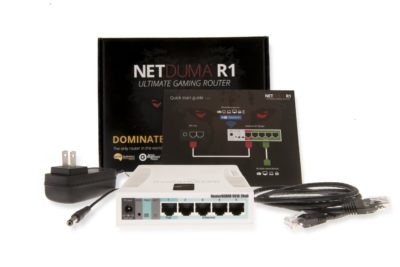 So enter the world of Netduma.  It does traffic shaping on the fly and allows you to set tight standards on what kind of connections you accept, and which to avoid like the plague.  In strict mode with 0 ping assist for example, anyone outside of your specified geographic range gets rejected, period.  That means if you set a radius of 300 miles and your home location is in Arizona, you will never play with someone from Florida.  It’s that good.  You can set them as you wish to balance fast matchmaking with excellent ping times, but it doesn’t take long to figure out the sweet spot.  There are so many features to cover on this router that I strongly recommend watching the YouTube video in this article.  I cover almost every feature top to bottom and will hopefully save you some time when setting up your router at home or on the go.  I can tell you that with less than 30 minutes of tinkering, you can have a robust, highly reliable network that gives you the best possible multiplayer gaming experience you can imagine.  This is all with a tiny little router with the slickest interface on the market.  For $200 USD, you can own one today, via www.netduma.com or Amazon. 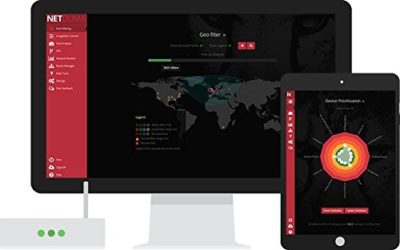 In short, I can’t speak highly enough of what this router brings to the table.  It’s beyond the years of any high end router on the market when it comes to firmware and features, and the firmware only gets better and better with each update  Sure it doesn’t have a DLNA server or good USB host performance, but it wasn’t meant for that.  It’s meant for controlling traffic on your LAN and helping you wreck face online.  There’s a new firmware coming out soon that will take this router revolution to another unworldly level, so it’s the gift that keeps on giving!  With a compact size and mountable chassis, you can literally put this router anywhere, or even take it on the go with you.  Gamers invest stupid amounts of money in custom controllers, cables, fast screens etc.  What good is all that against a lagging opponent?  Invest $200 in something that’s going to give you real-world, tangible results on every game you play, every day you play.  Buy the Netduma R1.

LucidSound LS35X Review – Performing Where It Matters Most

Good Where It Matters I’ll start off by saying I have never reviewed a better wireless headset under $200 before. It performs great where it matters most: sound quality and comfort. Oh hey, it comes …

Purpose Built with Performance in Mind Sabrent makes some pretty amazing products, including blazing-fast SSDs. I was excited to be covering this USB-C 3.2 4-bay dock for a lot of reasons, but before I get …

Typically, something has to give at this price point, but I think Movo found a way to provide a really solid mic option on a budget. There aren’t any glaring flaws or issues, which makes …