When you look back at major changes in performance, it’s easy for things to get muddled together.  There are a few things that stand out vividly in our mind such as dual and quad cores, PCI-Express, and Solid State Drives.  Computers are certainly getting faster and some standardized interfaces are finally struggling to keep up.  Higher end SSDs can saturate a SATA 3 bus and we’re already at the limit of what the bus itself is capable of transmitting, which is roughly 550MB/sec.  Vendors can and have made SSDs faster, we just can’t always benefit from them (unless you’re willing to buy a PCIe based SSD). 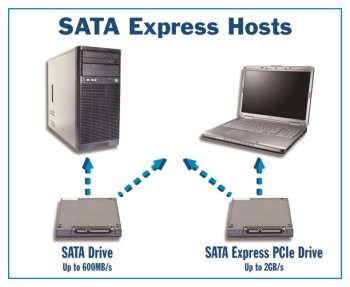 SATA-IO, the organization responsible for SATA standards, has announced the upcoming technology that will finally allow us to take SSDs to the next level.  SATA Express is a mechanical specification, rather than a protocol.  It ends up allowing us to up to almost four times the speed of current SSDs using channels just as PCIe uses.  Because the protocol hasn’t really changed, the system will still be backwards compatible with older drives (without the speed boost of course).  This is essentially a merge of SATA and PCIe technologies.

To me, this isn’t a game changer.  I like the idea of higher speeds but there are already better interconnects being developed.  Thunderbolt can blow these speeds out of the water and has been around for a few years now.  If it were less expensive we’d be seeing a lot more of them but right now it simply isn’t cost effective thanks to Intel and Apple wanting too much.  So will I be going out of my way to upgrade to SATA Express?  Absolutely not.  I love the idea of higher speeds but the implementation is cumbersome and I think newer interfaces and protocols will make this connection technology short lived.

Titanfall Patch Update – All the details from the devs…

There has been a lot going on in Titanfall lately and the devs are trying to communicate all changes as much as they can.  Whether you agree with the changes or not, here’s the entire …