VALHALLA, N.Y. – June 11, 2013 – Turtle Beach, U.S. based pioneer and market-leader in gaming headsets, today announces the iSeries line of high-end media headsets. The iSeries– including the wireless surround sound i60, wireless amplified stereo i30, and wired amplified stereo i10 – are the first headsets designed for use with Apple products. The iSeries headsets are packed with innovations that Turtle Beach first introduced to gaming headsets but are new for Apple users, including features that improve audio, chat and voice call quality and provide an unmatched level of control over audio. 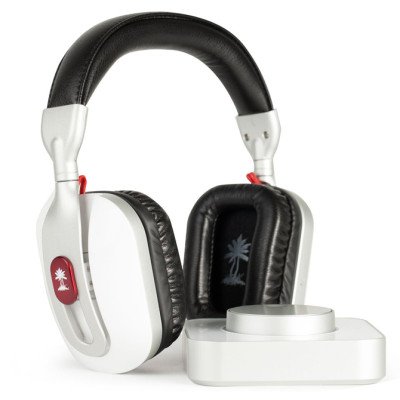 The i60, i30 and i10 share the same core design that blends style, quality, comfort and durability and features premium finishes, including a leather headband and leather-covered memory foam ear cups. They will also feature innovative dual boom-less microphones that deliver clear, high-quality audio during chat, and voice calling. Plans call for the headsets to also recognize physical taps on either ear cup as a programmable control signal, and they go into sleep mode when they are laid down and power on when they are picked up.

The flagship i60 features a control unit for use with Mac desktops and laptops that provides fingertip audio and preset control. Turtle Beach anticipates that the i60 will be the first wireless headset for Apple users to provide:

The i60 headset can be paired directly with Bluetooth devices and act as a stereo Bluetooth headset or as a wired stereo amplified headset using the provided 3.5mm standard cable. The i60 will be the only headset that can connect simultaneously multiple Apple products, so you can take calls through the headset while you are gaming or listening to music.

The i30 is a wireless stereo Bluetooth 4.0 headset packed with features, including voice morphing and active noise cancellation. The i30 headset can also be paired directly with Bluetooth devices and act as a stereo Bluetooth headset or as a wired stereo amplified headset using a standard 3.5mm cable.

The i10 is a wired version of the i30 that has provides all the features of the i30 through a wired connection.

“Apple owners use their iPhones®, iPads® and Macs for entertainment, from music and movies to gaming and chat,” said Bob Picunko, Chief Marketing Officer at Turtle Beach. “The iSeries is perfect for users who want a headset that is expressly designed to do everything they can do with their Apple products.”

Turtle Beach is the market leader in gaming headsets, producing both wired and wireless headsets for gaming consoles including the Xbox®, PlayStation® and Wii®, handheld consoles such as the PS Vita® and Nintendo DS®, PCs, Macs and mobile devices. Turtle Beach has experienced steady growth over the past three years in response to strong, global consumer demand for the company’s gaming headsets based on their quality, innovative features, and value. In 2012 the company’s share of the U.S. gaming headset market grew to 53.2 percent, and Turtle Beach ranked behind only Microsoft, Sony, and Activision in 2012 sales of all gaming accessories.

“The iSeries represents the next logical step in our evolution from gaming headsets to entertainment headsets,” said Turtle Beach CEO Juergen Stark. “We are excited to bring all the features and innovative technology that gamers associate with Turtle Beach to Apple enthusiasts.”