I rarely play mobile games.  I tend to use my phone for reading news articles, Reddit, Googling obscure information, etc.  Things have changed however, as I have come across a game recently called Word Candy and felt compelled enough to write a review on it.  The game has a familiar theme to it.  It’s a word puzzle game with a theme around candy, as if the title of the game didn’t give this away already.  Right now it’s only on Android (sorry iOS users) but it’s worth checking out.  The highest level is 50, with each level getting progressively more difficult.  So far, I’ve spent at least 5 hours of play time to get to level 23 and I’m looking forward to more.  The goal is to connect letters together to make a word.  Words need to be of at least three letters, with some levels requiring four letters or a particular word theme.  If you somehow play through all 50 levels, there is an endless mode that lets you link as many words as you can. 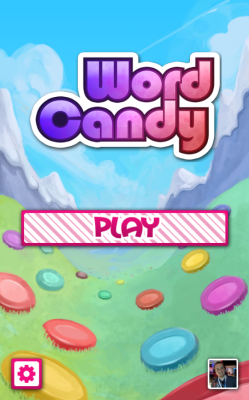 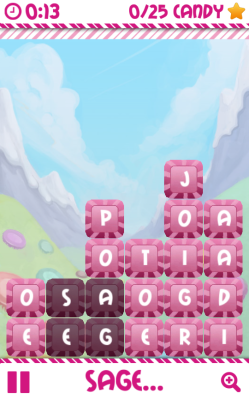 Why should I play?

It’s a brand new game so expect more growth and levels as the game matures.  In the meantime, 50 levels are more than enough to keep you busy for quite a while.  Even if you hit the level cap, it’s fun to go back and repeat prior levels so you can set the fastest time in order to beat all your friends.  The game features a Facebook login, which is not a requirement.  Instead the Facebook login is used to synchronize across multiple Android devices and track leaderboard scores among you and your friends.   The sync feature worked brilliantly for my Nexus 7 and HTC One M8.  Both devices let me pick up where the last one left off without any hassle.  Lastly, the Facebook login doesn’t post anything on your wall so you can rest assured your gaming habits are private.  Unlike many games, this one doesn’t make your brain feel like mush after going at it for a while.  Consider it as exercise for your brain.  Lastly, it’s fun and refreshing.  If I want FPS graphics I’ll play on my PC or Xbox One.  This game feels right at home on a phone or small tablet.

This game is Free to Play.  There are no ads until Level 6.  Once you hit level 6, starting the game for the first time will load an ad but you won’t be bothered again until you pass another 5 levels.  All in all it’s not a bad model because unlike many other games, you don’t have any ads while playing.  Think of the ad more as a preview before a kick-ass movie.  Once the preview is done your feature starts with an occasional “break” in between rounds.  Try downloading it today to see what you think!

Welcome to Volume 1! There is so much content to compare behind both networking products that we will first defer to our video.  Our second video series will have a more detailed write-up, as it …

Diablo 3 Review: From a Newb’s Perspective.

One of the most talked about sequels in the past decade (in junction with the plagued release of Duke Nukem Forever), Diablo 3 had high expectations.  Luckily, unlike the former, Diablo 3 has lived up …

Lights Lights Lights E.P. Light has been making custom accent bulbs for a few years now but their designs still feel fresh among a seemingly endless amount of accent lighting options on the market. The …