The verdict is in.  Tuniq is a top brand contender among the CPU coolers available on the market today.  When looking at the package, you know there isn’t an ordinary cooler inside.  Unboxing further confirms this suspicion as you inspect the metal retaining plate for the rear of the motherboard.  The weight is too great to use the traditional mounting configuration found with AMD’s AM3+ socket.  This cooling unit is also compatible with the new Core based Intel processors.  Unlike many other cooling units out there, this system has a single 120mm fan inside system, rather than 1 or 2 fans mounted on the outside.  It’s fairly efficient and does look a bit nicer than most other air cooled systems out there (all preference though).  The box would make you think this is supposed to light up with blue LEDs.  This packaging actually represents a couple other models they have but not this one, which is somewhat misleading.  Also included is a black rear panel mounted fan controller, Intel and AMD mounting hardware, and Tuniq TX-3 thermal paste.  The parts are made of metal so it should hold up over time.  I never personally use included thermal paste, and I’m up in the air on this one.  Tuniq has their own line of thermal pastes available online that’s been doing extremely well.  The only problem is you don’t get some of their higher rated paste with this fan.  The included TX-3 paste is better than what other companies have provided, but it doesn’t stack up to their own TX-4 or Arctic Silver 5.  I tried it anyway for testing purposes. 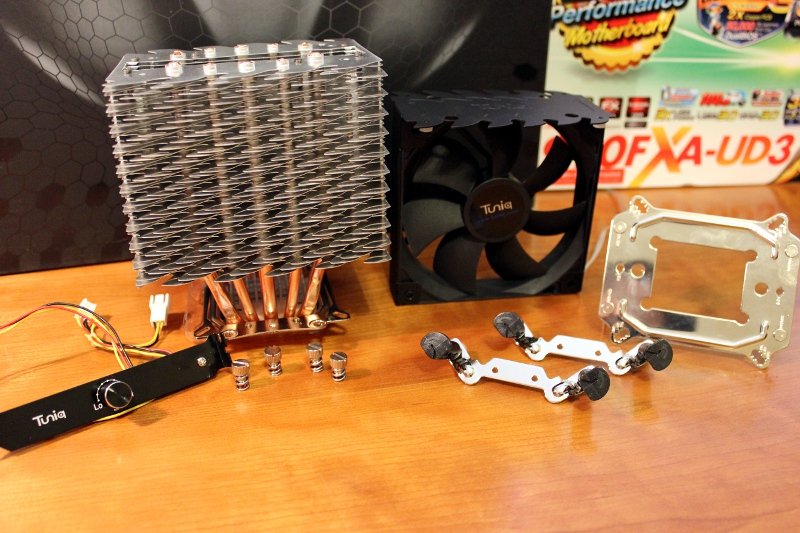 As you can see the cooling tower is fairly large which also comes with a little extra mass .  The size of this thing justifies the new mounting system they provide when installing it to your motherboard. 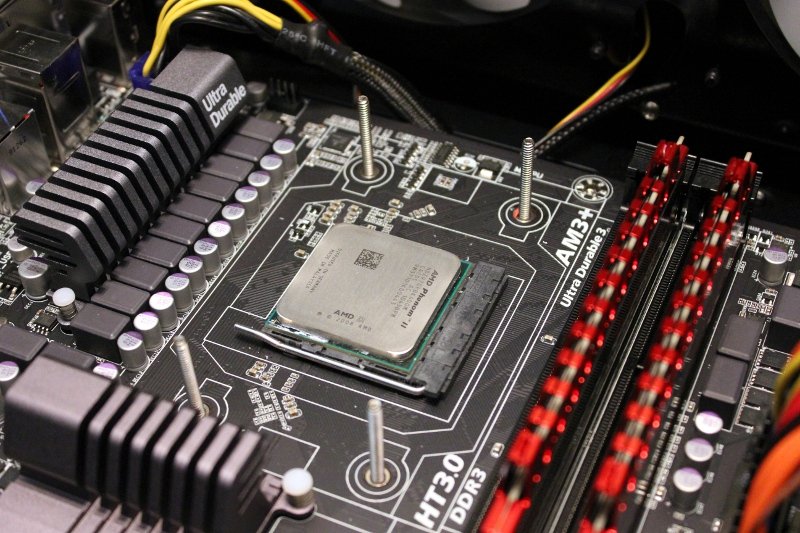 When comparing the new Tuniq CR-T120-EX-SV to the AMD OEM heatsink, it’s fairly safe to assume what the results will be.  AMD does have variants of their OEM coolers.  The higher end Black Edition Phenom IIs come with a copper heat sink version (pictured below), where CPUs like the Phenom 920 have a more basic heatsink.  For accuracy, we kept the factory installed thermal paste on the AMD cooler. 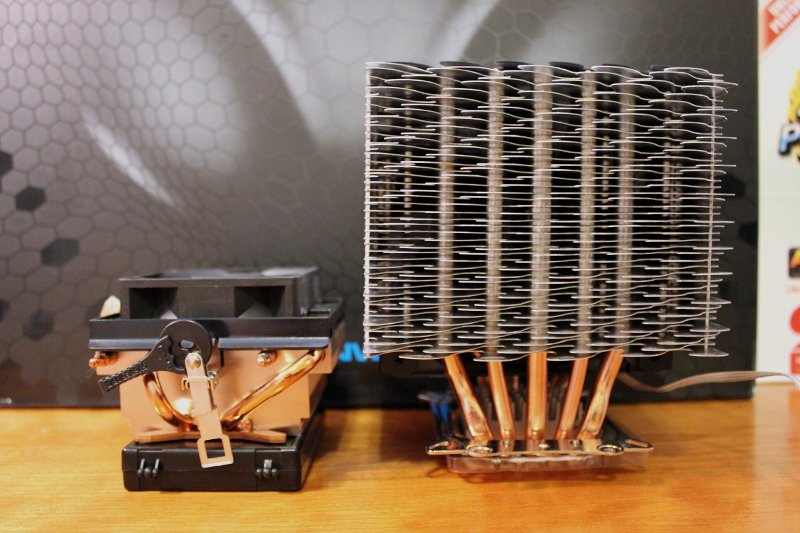 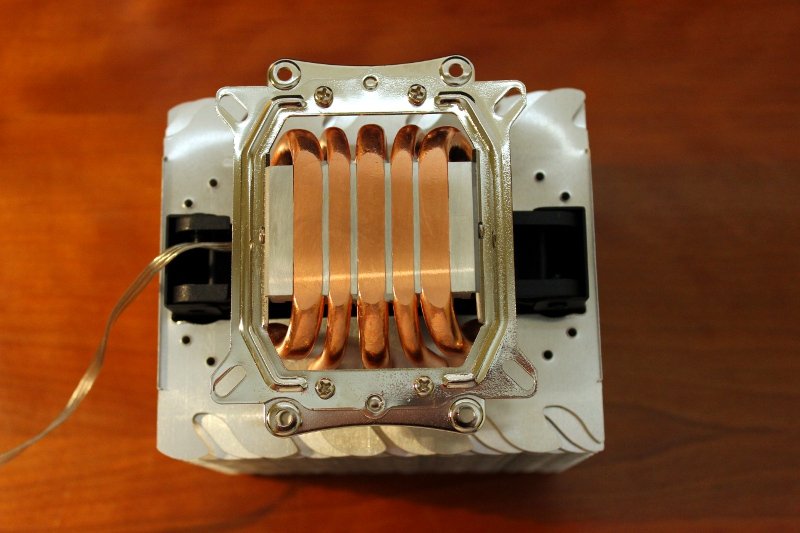 We performed multiple benchmarks with three variants; one AMD OEM option, the Tuniq with included thermal paste, and the Tuniq heatsink with Arctic Silver 5.    We provided a baseline configuration, and a mild overclock configuration for all three cooling setups.  For the overclock, voltage was increased slightly to 1.41, the multiplier was set to 19x, and the HT Reference Link frequency was increased to 205MHz, resulting in 3.9GHz.  Full system specs at the bottom of this review. 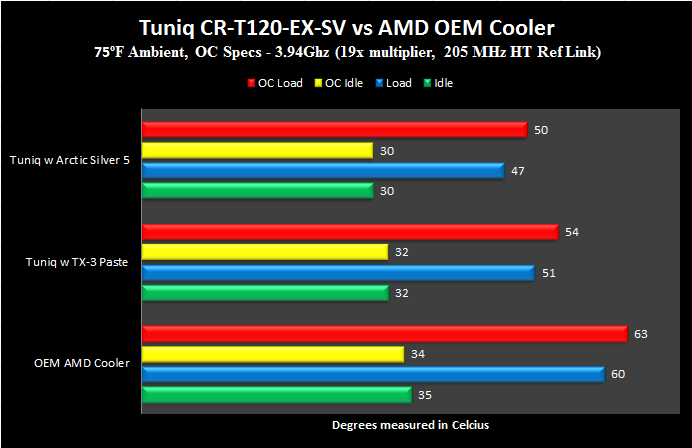 It was a resounding win for the Tuniq cooler which was expected.  Combined with Arctic Silver 5 or their own Tuniq TX-4 paste, it’s safe to assume we could have pushed the AMD Phenom II 970 over 4GHz with ease.  Another thing that should be noted was noise.  According to CPUID HWMonitor, the AMD cooler hit 5600 RPMs at full load!  Even at idle, there is a noticable noise difference.  Idling with the Tuniq system allows for lower than max (2000 RPM) fan speeds, making the fan almost silent compared to other case fans you may have.  The only warning I can provide is to check your motherboard chipset and RAM clearance to make sure this thing will fit.  Some PC cases might also not be able to accommodate the height of this system so do your homework!  All in all, the Tuniq CR-T120-EX-SV gets our recommendation.  You should definitely consider their Tower Extreme line next time you’re in the market. 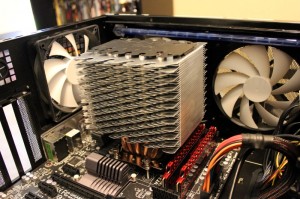 For more about this brand, check out Tuniq’s website.

Queue the music as I introduce my favorite computer case I’ve ever had the joy of working with. It’s not the most expensive case, nor the flashiest. What the Dark Base 700 case represents is …

May 22, 2016 Joe@GadgetryTech PC Hardware and Peripherals 0

Asus has officially announced the new ROG Strix GL502VT gaming laptop.  The teaser video lacks significant detail, so please read on to learn more about the specs and rich featureset.  The launch of a new …